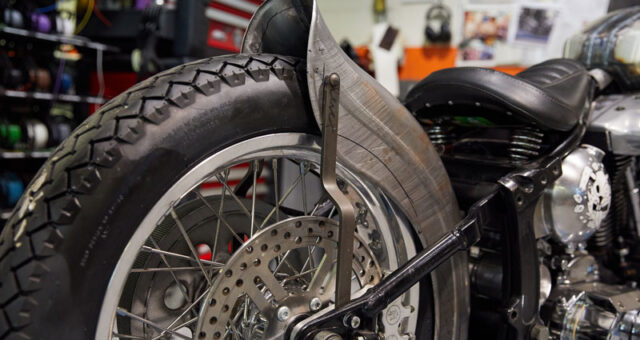 Step by step we make progress with the Harley build. The back-fender was somewhat of a challenge. My idea was to have a duck-tail fender, fitted as tight as possible. Since I have an old-style tires on the rim, we needed a bit of a bigger distance from the tire to the fender. This because it can slightly inflate on the height while driving. The safety margin for an old-style tire is bigger than for a modern tire. But in the end we found a good solution (shown in the photo).

Since the back-fender is tight to the tire on the sides we decided to have some fender-struts. As you can imagine, that was a challenge in itself. The goal was, to have a tight look, looking from the back. Finding the right angle was not easy. The struts should no be to prominent and at the same time still functional, to give enough side-stability.

The fender-struts turned out very nice in the end. If flows nicely with the form of the rear wheel swing arm.