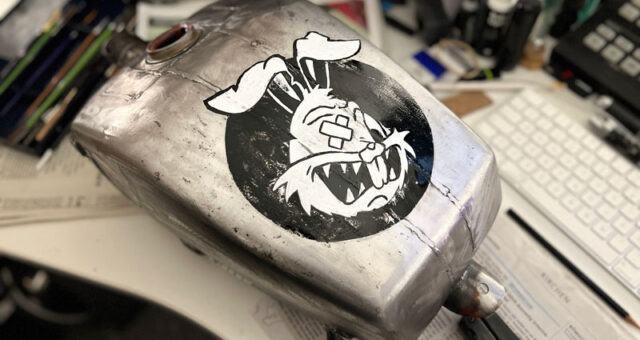 Over the holiday season I had the gas-tank at home to give it a paint-job. At start I was not sure what to put on. After several sketches on my iPad I finally landed on a sketch/design I was happy with. So it was time to transfer the sketch on to paper and then on the gas-tank.

The motive was clear. A rabbit had to be on the top. The only thing I was not sure was, if I should also put the lettering on it, with the bikes name “Rabbit Runner”. At the end I decided to have only the rabbit head on it. But since the bike should have a rough look the painting also needed some ageing. So I had several passes until the paining was done. The end result looked better than I expected. It was the first time I done such a paint job.

Next on the list is the fuel gage. Since I will only have a tube in the side I had to came up with a fun idea. So when the tank is full I painted a running rabbit. At the end I painted a turtle lying on the back somewhat pissed about to have a empty tank. It’s also has an analogy to the story about the race between a rabbit and a turtle. Only a bit adapted to my needs, since this is not a race 🙂

The only thing left now it the side batch(es). In the long recess on the bottom on both sides of the tank I will put an old Harley-Davidson emblem on it. The side with the fuel gage will be a bit modified since the drawing will interfere this the Harley Logo.

In the round recess I will do a Rabbit Runner type-art. But this is still in progress. This might take a moment until I can show this.