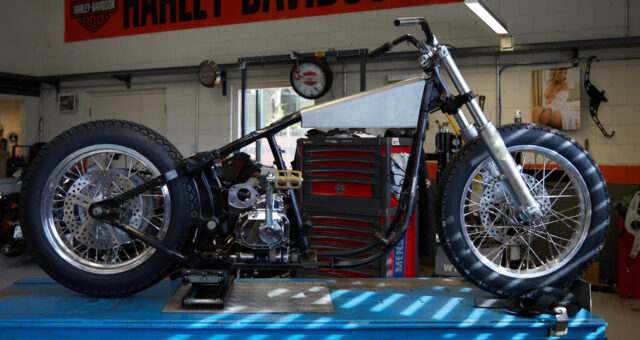 Since the last update a few more parts have arrived.

Today the break disk got mounted on the wheels. They are looking great. The break disk which I had before looked not great. They where too much closed. Meaning, they covered to much of the wheel. The ones I have now look so much better. You actually can see much more of the wheels/spokes.

Also the kick-starter with the gear box have arrived. I never had a kick-starter before on my Harley’s. So this is a first. I love the look of it. And also it fits the style I am going fore with this Harley.

You also can see the tunnel for the gas-tank. Since I will have a custom made gas-tank this is a good basis for the upcoming gas-tank.

Last but not least the front forge has now the right height. We lowered it as much as we can, so we still have a little suspension. After all, I don’t want to have a too hard bike. But I like to have it sit as low as possible. From the side view it looks just right.

The oil tank which you might have seen from the previous post is not on the bike at the moment. I’m still working on the painting I’d like to have on it. I will share it as soon I have it ready.